Varnamtown #12 and the winter update I was part of several small shows over the fall including the Wooden Boat Show in Southport as well as the studio open house for the holidays. I made several more trips to Varnamtown, took tons of photos, met and talked with folks about the state of shrimping on the North Carolina coast and began preparing for finishing up this project.

Varnamtown: An Aging Life is nearing completion and the Varnamtown exhibit of the complete works will be June 17th in Varnamtown.  18 of the 20 acrylics are complete and the images for the final 2 paintings have been chosen.  For those of you that are getting a print from the Rocket Hub fund raiser you can choose from the completed Varnamtown paintings or wait for the completion of the project.

Exciting news!!  The book of all the paintings will be ready in June in time for the opening in Varnamtown! 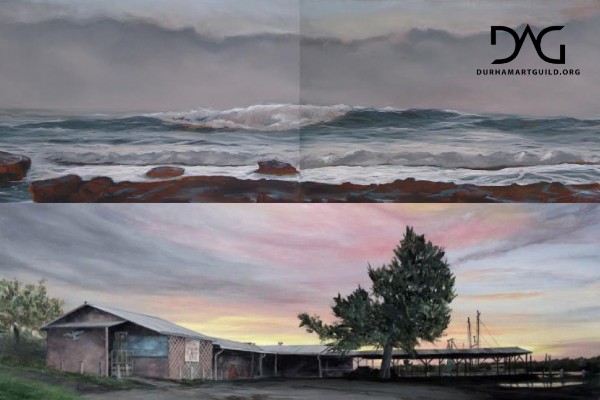 Longitude and Latitude:
Explorations of Land and Sea

On the 14th of December I received word that my work had been juried for a 2 man show at the Durham Arts Guild to be exhibited in the main Suntrust Gallery at the Durham Art Council building.  This is a honor and to say I was excited in an understatement.  The show was the first for the year so getting it ready in time made for busy early January. 2016 started with lots of work framing and getting things to the gallery to hang.  I must say it is a wonderful problem to have :)  There are 23 of my paintings on display and of that, 13 of them are part of the Varnamtown series. It is gratifying to get some hometown recognition too!  The show closes this Saturday, March 12.  Be sure to stop by if you haven't made it yet...or just want another look at my paintings well lit and hung beautifully by the Gallery Coordinator.

They do it all at their own risk... " The docks, the boats, the markets, the bringing in of the catch, the people, the ties to the sea and the heart and personality of this people are so tied to the whims of the ocean and the weather gods.
Until recently, over ninety percent of the men and women of Varnamtown made their living on the water. That number has been reduced to a small fraction. Those who are left spend long days, often in hostile elements, to bring their catch to market. They compete with large commercial fishing companies and still hold their own, putting food on the table and a roof over their head.
The culture of Varnamtown is not unique but it is emblematic of a culture that is shared by small coastal towns and villages around the world." #16 of the ‪Varnamtown paintings:  "Morning Commute."  This is looking up river from the landing, very early morning. — Varnamtown, North Carolina. #17 in the Varnamtown: An Aging Life series. The boat is the White Pearl.  At over 90 years old she is the oldest registered shrimp boat in North Carolina possibly on the East Coast. Until recently she has been docked in the Varnamtown neighborhood on the Lockwood Folly but has now been moved to the Holden Beach Seafood property.  The White Pearl will be preserved as a memorial to the lives of our local fishermen. The photo for this painting was taken this past November.

Friday April 1st and Saturday the 2nd I will be showing a number of the Varnamtown paintings at the Franklin Square Gallery in conjunction with the Maritime Museum in Southport.  This is a weekend only event that is part of a fund raising weekend for the museum. I am honored to be able to share a bit of our coastal heritage with visitors there. There will be several of the originals as well a prints.  If your in the area stop by for a visit.

The Varnamtown exhibit of the complete works will be June 17th in Varnamtown.

Stay tuned for the exact location as well as possible events that well be going on associated with the opening.

Finally a bit of bragging

My painting "Lockwood Folly Mist" has been accepted into the 2016 ASMA (American Society of Marine Artists) North Regional Exhibition  at the Minnesota Marine Art Museum (MMAM) - the exhibition is April 15 to July 24, 2016 I am looking forward to an exciting and busy spring and I hope to see you all soon.